The Story of Willie Renssiem Part One

The following are gold rush recollections of a legendary prospector known as Willie Renssiem as recounted at nightly campfires by Bill Meissner.  Bill Meissner along with his wife Pat have owned and operated the 49er RV Ranch in the heart of Gold Country Columbia, California since 1980.

The 49er RV Ranch is located ½ mile from Downtown Historic Columbia California, 15-minutes from Sonora and Jamestown which is popular for Railtown, which boasts the Polar Express during the holidays.  The 49er RV Ranch in California’ s Gold Country is an hour and a half from the Yosemite Valley floor.

His fictional character was gleaned and personified from a profusion of California Gold Rush letters and diaries.  His character is used to illustrate the challenges of a journey to California and the grueling life of the Gold Rush prospector.

“The Story of Willie” Part One

“I recall leaving my carefree Kentucky home in the Spring of 1850 to join the exciting rush to California’s gold country.  Being 19 and having few commitments, I craved adventure and excitement.  Before leaving, I promised my darling Patti I would return in two or three years with enough gold to marry and start a family with her.  I asked her father for his approval and blessing of our marriage.  He withheld this approval because I lacked evidence of an ability to support his daughter adequately.  He emphasized he wanted assurances that his daughter would not be forced to return with child if I was unable to support a family.

I innocently expected a smooth and enjoyable adventure that would yield enough wealth to gain his approval.  How naively wrong I was to learn; this would not be the case.  This adventure proved to be a grueling and dangerous journey.  I barely survived crossing full rivers, endless plains, treacherous mountains, and a desolate overwhelming desert.

The spring swollen rivers were wider than I believed possible, more like an ocean with a strong current.  Some treacherously swallowed our prairie schooner wagons, taking lives.  The vast plains went on monotonously, seemingly forever.  When distant mountains gradually came into view and steadily grew as we approached them, I remember believing they reached to the heavens.  In the distance, they appeared beautifully peaceful, promising a welcome relief from the tedious plains.  In crossing them, hell became a better description.  These mountains were a series of formidable rocky demons that demanded and took human sacrifices.  They repeatedly took lives when we were forced to hoist wagons over sheer cliffs.  I was very fortunate to escape serious injury during these crossings.

After conquering these rocky demons, we had to cross a vast formidable desert.  Some of my companions simply gave up and died from heat exhaustion and thirst while trying to get through this endless waste of overwhelming heat and scarce water.  I remember a vision on my 20th birthday, of my Patti giving me the strength and determination to continue.

Then came another range of mountains called the Sierra Nevada’s.  I believe this is Spanish for the Snowy Mountain Range.  There was talk about a previous Donner party, who mostly died in a snowstorm four years earlier.  We, however, chose a different route.  A pass that Kit Carson guided General Fremont through in 1844 and a group of Mormons improved the year before in 1849.  This pass was referred to as Carson Pass.

Oh, I almost forgot to mention the Indians we encountered along the way.  We were concerned about reported conflicts, but most we met were friendly and helpful with trading for needed supplies or guiding us through difficult areas.  They did attempt to steal our horses and mules if we relaxed our guard.  I learned from our wagon train boss that the Indians did not understand our definition of stealing was different from theirs.  In their view, a warrior proved his superior ability by successfully stealing an enemy’s possessions without being caught.  This appeared to me, like our sporting events, in that individuals or teams proved their superiority by overpowering opposing teams or individuals. Of far greater concern were accidents and dreaded cholera.  The most common accident involved being run over by a wagon wheel while carelessly walking in a bored state.  Overall, about one in twenty died along the trail due to an accident or illness.

At last, when we crested the Sierra Nevada’s, we beheld our destination of California and it’s Goldrush.  We felt this was a vision of the Promised Land.  Oh, how we rejoiced in anticipation of completing our difficult six-month journey.  After arriving in California, I found the foothills swarming with others seeking to find the elusive gold.  Upon reaching the foothills, we parted in differing directions.  I headed south, lured by the enticing stories of easy wealth found in a new bonanza gold camp called American Camp, now know as Columbia.

The map attached is the Mining District Map of the Gold Country when “Willie” arrived in Columbia, California. 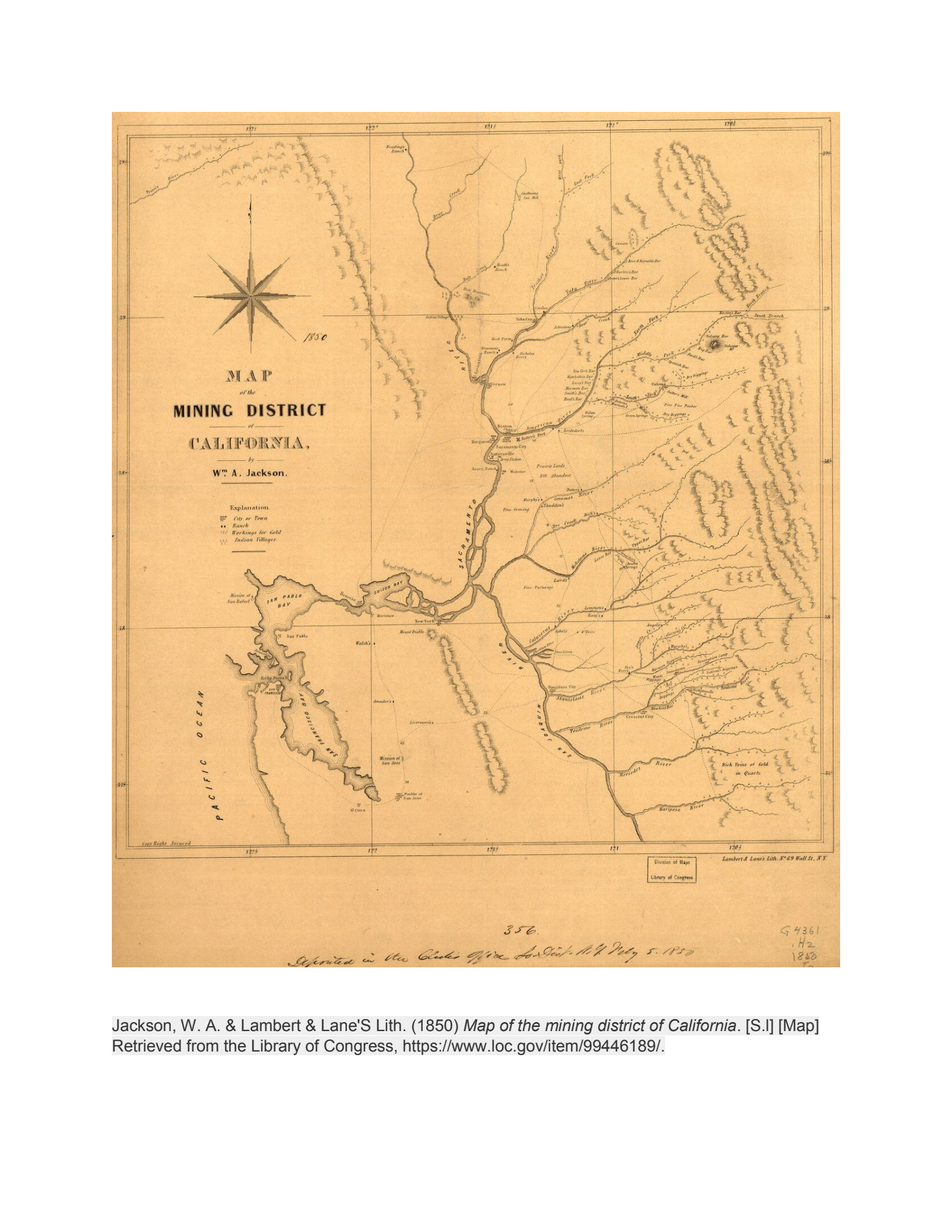